Full Name
Yvonne Thomas
Job Title
Strategic technologist
Company
DTG (Digital TV Group)
Speaker Bio
Yvonne Thomas graduated in Television Technologies and Electronic Media Engineering from University of applied Science Wiesbaden (HSRM), Germany, in Oct. 2010. She received a prominent award of the ARD/ZDF Academy for her thesis in September 2011 at the IFA in Berlin.
Following these studies she started beginning of 2011 to work at the European Broadcasting Union (EBU) in the Technology & Innovation Department as Project Manager. She was responsible for projects and strategic programs on 3D and Future Television technologies, such as UHDTV or LED studio lighting and highly involved in its standardization.
In September 2015 Yvonne joined Arvato Systems´ Broadcast Solution division. As a Product Manager she was responsible for the journalistic frontend “MediaPortal” of the Video Production Management Suite and included trends like AI and machine learning.
At NAB 2017 Yvonne was presented with the annual Technology Women to Watch Award from TVNews Check.
Since September 2019 Yvonne has been appointed the DTG´s Strategic Technologist overlooking the IPTV and UHDTV workstreams. She is active in various industry bodies (e.g. as former SMPTE Education Director and current Governor EMEA & Latin America) and works together with DTG members to explore the best viewing experience and strategies to move to an IP world.
Speaking At
How millennials grow in the Media Industry: A Story by Yvonne Thomas
Tuesday Technical Session Primers 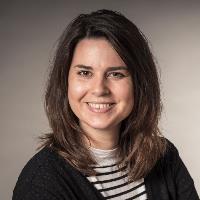