Full Name
Ian Hunter
Job Title
Co-Founder / Creative Director
Company
New Deal Studios, Inc.
Speaker Bio
Ian Hunter is the creative director, Award-winning visual effects supervisor and cofounder
of New Deal Studios (NDS). A renaissance man with multiple talents in
many disciplines, Hunter has overseen production of many complex sequences of
some of the biggest blockbusters of our time.
From pre-visualization to miniature build, practical effects photography, and all the
way through digital effects including matte painting, 3D digital animation and
compositing, Hunter has the rare gift of having a hand-on approach to directing and
creating effects while keeping a solid business sense. A visionary in the field of
motion picture visual effects, Hunter has worked on many feature films and
commercial projects over a 25 plus year career that has garnered him recognition in
the entertainment industry.
Hunter has won 3 Visual Effects Society (VES) Awards for sequences in Inception,
The Dark Knight, and New Balance Love/Hate Anthem. He then entered into an
immerging entertainment media form by writing and directing the cinematic Virtual
Reality film Kaiju Fury, which went on to being featured in the Sundance Festival’s
New Frontiers Program.
Hunter supervised New Deal Studios contribution to Christopher Nolan’s science
fiction film Interstellar. This work garnered Hunter nominations from the BAFTAS
and Academy Awards for Outstanding Visual Effects. He would later go on to receive
both awards.
Recently Hunter worked on director Damien Chazelle’s science fact film First Man
which chronicles the life of astronaut Neil Armstrong in his quest to go to the Moon.
Again Hunter’s work received recognition from the VFX and film community with
First Man earning Hunter a VES Award for Supporting Visual Effects, and his second
Academy Award for Outstanding Visual Effects.
Looking toward the future, Hunter plans to parlay his experience in visual effects
and film design into other areas of film making, including writing and directing.
Hunter is a member of the Visual Effects Society and the Visual Effects Branch of The
Academy of Motion Picture Arts and Sciences.
Speaking At
The Magic of the Award Winning “First Man”: How a Realistic 1960’s Apollo 11 Space Experience Was Created on Earth 50 Years Later 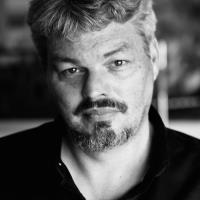