Full Name
Mark Harrison
Job Title
MD
Company
DPP
Speaker Bio
Mark spent many years as a Director, Producer and Executive Producer. He has won numerous awards for his filmmaking, including an International Emmy and a BAFTA nomination. He has held senior roles within the independent production sector and the BBC, including as Managing Director of Soul Purpose Productions, and BBC Head of Arts. Mark’s interest in production innovation and business change led to him being appointed Controller of Production for BBC North in 2010, and later Director of Transformation in the BBC’s Design and Engineering group.

In 2015 Mark became Managing Director of the DPP – the media industry’s international business network, which he founded. Today the DPP has over 400 member companies from across the whole media supply chain – from global tech giants to start ups. It brings customers and suppliers together to solve problems and create business opportunities. 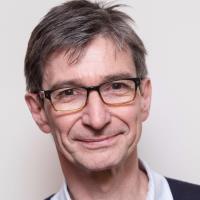